Every now and again, I get the bug to build something. Lately, I’ve been following MicroPython and the microcontrollers that it supports. The new hotness is the Expressif ESP32 chip. These are available from a number of different sources, many supplying a breakout board. Prices are all over the place from 20+ to 8+ depending on where you shop and how patient you are.

I went with the dev board from Expressif. I got a pair of them for about 15 each from Amazon. I like the trade off of delivery time, supplier and cost. You can see and order it here: 2 PACK Espressif ESP32 ESP32-DEVKITC inc ESP-WROOM-32 soldered dils CE FCC Rev 1 Silicon

With just a bit of searching, you’ll find that you need the latest Micropython for ESP32 and the esptool.py

. Then after you connect your Board to your computer, you can load up the MicroPython firmware.

Now in the world of microcontrollers, blinking an LED is the “Hello World” program. However, the boards I purchased only had an LED that lit if the board was receiving power. No other LEDs on the board connected to a GPIO pin like some other breakout boards. It does have 2 switches, one of which, Switch 1(SW1) is connected to the GPIO0 pin. 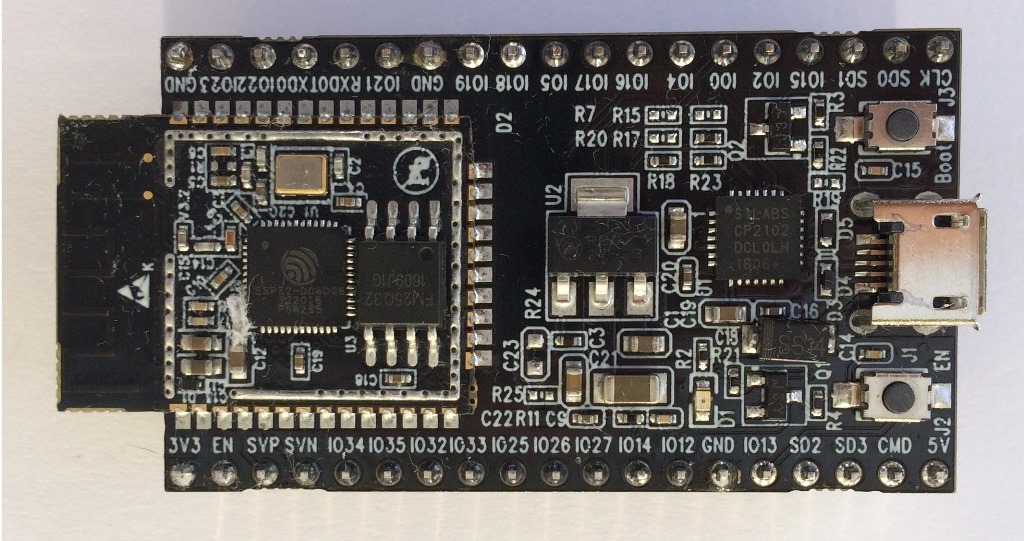 In the image, SW1 is the button on the top right, labeled boot.

So I write some code to figure out the initial state of GPIO and then toggle the button a couple times.

I did sort some of this out using the serial REPL, but for this post, I wrote up a script to demonstrate my findings.

Note: you will need to press sw1 twice before you see anything after the ampy cmd.

As you can see from the results, the initial state of GPIO0 was high(or 1). When sw1 is pressed/closed it goes low(0) and goes back high(1) when it is released/open. If you look at the board schematic, in the Switch Button section, you’ll see that when sw1 is closed, it shorts out GPIO0 to ground. This would indicate that you were pulling it low from a high state. So our observations match the schematic.

If you look at the schematic, you will see a capacitor from R3 to Ground that is used to debounce the switch. You should assume that all mechanical switches bounce and that bouncing needs to be dealt with in either the circuit or code. Life is much easier if you debounce the circuit with hardware.

In an upcoming article, I’ll rework the example to be more energy conscious by using an interrupt to signal the state change.

May the Zen of Python be with you!